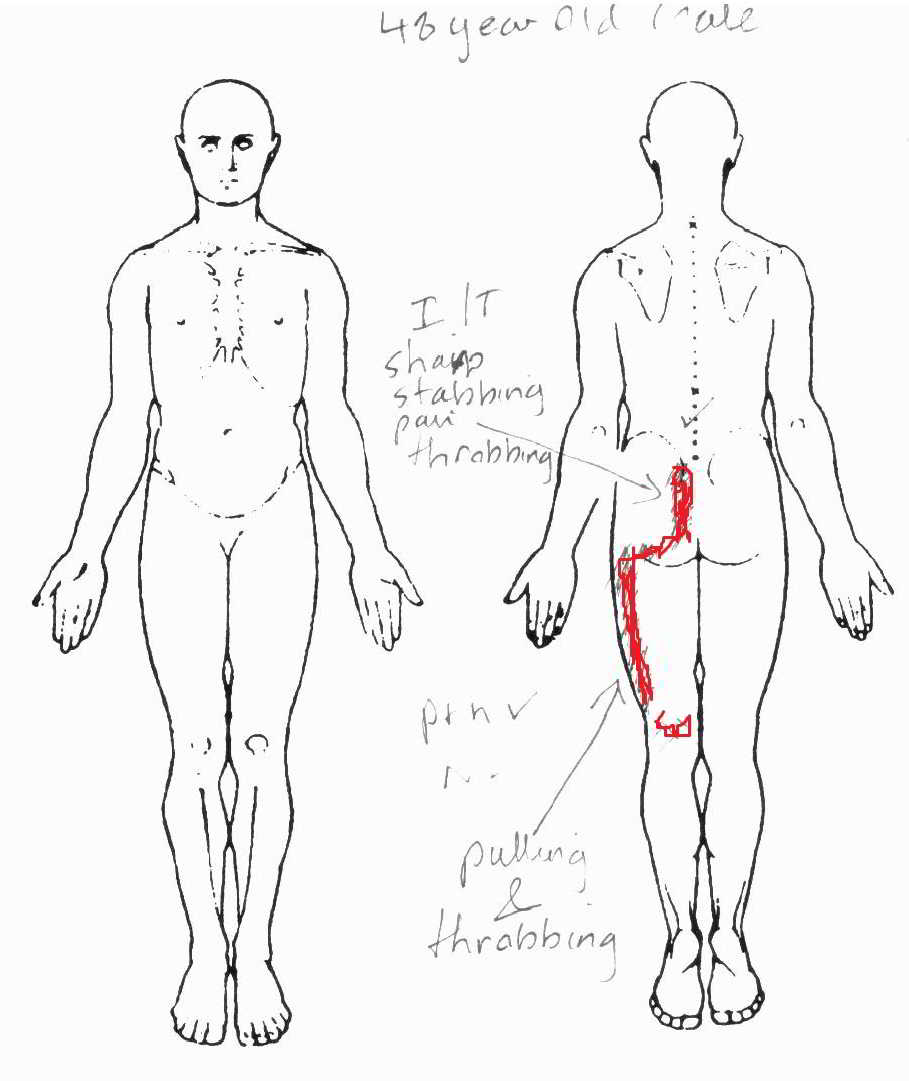 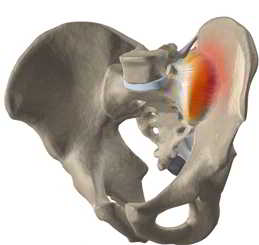 A 48 year old male presented with pelvic pain, buttock and outside back of leg pain. This was of an intermittent nature, which was OK in standing, and running, however resulted in severe stabbing and throbbing pain when sitting; improved when lying down, but commenced again around 3 -4 am requiring him to get out of bed and walk 5-10 minutes before being able to consider sleep again.

The first episode of buttock pain occurred some 2 months previously. It coincided with a severe fall onto the left side whilst running during an Adventure Race 1 week prior to it's onset. Initially, the pain only occurred when standing up after sitting for a length of time, but only lasted a few minutes. No discomfort was present during sitting and this period of time was accompanied by some 1200km of driving, as well as a lot of mountain biking and soccer. Pain and stiffness subsided over a period of 4-6 weeks, during which time the client was running over 2 hours, twice a week and swimming once a week, as well as playing soccer once a week. Three weeks ago, whilst clearing underneath the house, a 40kg lift of an old bag of cement, resulted in the onset of the current pain. Strangley enough, the few days prior to the lifting incident, his right index finger knuckle suddenly became swollen and painful and there was some strong mid back pain with rotation. Some question of sceptic arthritis, however no other symptoms, such as fevers, malaise, open wounds or gut infections to suggest this. Nor was there a family history of seronegative spondyloarthropathies.

The past history suggested several falls onto the left side during cycling accidents over the prior decade. A couple of short term (few days) low back pain episodes were also recalled when in his late teens.

Still able to run and work in standing during the initial period of the most recent onset. However, 10 days into the latest episode the lateral hamstring spasms were so strong that no striding out was possble and the client decided to rest from running, whilst continuing to work in standing. 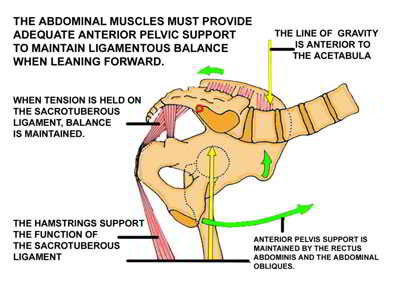 Bending back slightly restricted and painful at end of range. Bending back with left sacral torsion initially eased the pain. A week later, bending back in standing without sacral torsion eased the pain. Modified pushups, cobra pose, extension in lying slightly worsened the pain.  Rotation about ¬æ and lateral bending 2/3. Fabers test with contralateral ASIS stabilisation and knee pushing upwards resulted in pain along the sacroiliac joint line. Hip ranges of motion slightly restricted in flexion/adduction (knee to opposite chest) and in extension.

Palpation of the long dorsal ligament was painful, as was the L5/S1 z-joint capsule, both of which produced leg pain. Other trigger points, such as the piriformis, gluteus medius and vastus lateralis were tender on dry needling.

Reassessment revealed a posterior ilial rotation (nutation). Treatment consisted of mobilisations into anterior ilial rotation (counter-nutation), dry needling, muscle energy techniques to Psoas Major and external rotators, sacro-iliac belt, McKenzie lumbar roll, McKenzie extension exercises in standing with anterior ilial mobilisations. Also commenced Voltaren 12.5mg (NSAID's) for 10 days (initially for 3 days 3 per day, later just at night). Voltaren was later replaced by a combination of Curcumin, Devils Claw and Cats Claw. Over a 2 week period modest improvements occurred. Then one night, the client slept in their sick son's bed with the left leg hanging out of the bed into extension and adduction whilst sleeping on the right side. This resulted in some 2 hours of sustained stretching to the front of the hip, which freed the patient from significant leg pain and was the first progress in improving flexion. Presumably, this was a stretch of the ITB, gluteal medius and minimus and Psoas. Further progress was made through thoracic ring shift relocations and lateral breathing exercises designed to 'rack and stack' the ribs. Final major contributions to progress were made through dry needling over 3 weeks. Exercises involved swimming, cycling (mountain bike on the road) and soccer ball juggling. These were gradually increased as symptoms subsided. The latter exercise of juggling probably had an effect on balance and load transfer through the SIJ, as well as central nervous system effects on left - right discrimination, also know as 'lateralisation'. It is well known that in some neuropathic pain conditions such CRPS (Sudeks atrophy), lateralisation is important for pain relief and recovery (Moseley 2004). At the 4 week mark, moderate running was recommenced and a new road bike was ordered 4 months after the initial onset of symptoms. Further treatment was also sort on the 0-C1-C2 (atlas - axis) complex due to the global nature of stiffness. Not surprisingly, during a 4 hour garden 'clean-up' of raking leaves, due to an impending bush fire, more symptomatic relief was attained through increases in the range of movement of forward bending, which was also probably accompanied by increased proprioceptive awareness from rotatory trunk function, gluteal and abdominal activation and stimulation of the spiral myofascial train.

Many large and small muscles have relationships with the ligaments of the sacroiliac joint including the piriformis, biceps femoris, gluteus maximus and minimus, erector spinae, latissimus dorsi, thoracolumbar fascia, and iliacus. Any of these muscles can be involved, either being weak or inco-ordinated or in spasm, with a painful and dysfunctional sacroiliac joint. The SI joint is a pain-sensitive structure richly innervated by a combination of unmyelinated free nerve endings and the posterior primary rami of spinal segments L2-S3. The wide possibility of innervation may explain why pain originating from the joint can manifest in so many various ways, with different and unique referral patterns. 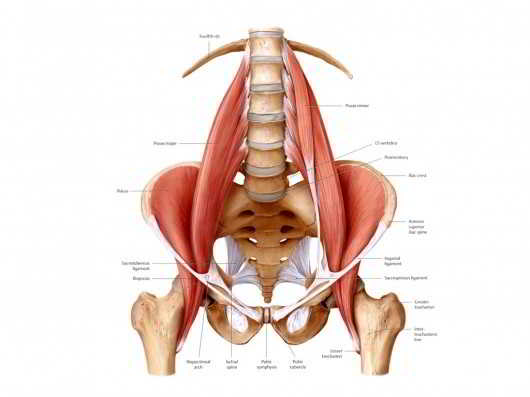 This patient was me. This represented an existential crisis as I was extremely active with my 7 year old son and also felt that as a practitioner I should have known better. In many ways it was good to be on the receiving end of severe acute pain which took many weeks to resolve, for in this way I can have an even better understanding of the process which our clients must go through.

The twists and turns of torticollis Hello readers and welcome to our August 2020 blog. This month‚Ä
...Read More

Hiking, bushwalking and rambling ‚Äì it‚Äôs so much more than a view! Do you love the outdoors? Fre
...Read More

How to be productive in the gym We‚Äôre a time-poor world these days and unfortunately for a lot of
...Read More

HIIT workouts for all Alright people, it‚Äôs a new year which means it‚Äôs time to get a move on an
...Read More

Preventing falls in the elderly Hello everyone and welcome to our October blog. This month we‚Äôr
...Read More

Physiotherapy‚Ä¶ What is it exactly? Hello everyone and welcome to our September blog (it‚Äôs 4 mon
...Read More

Body facts: The Quadriceps muscles Fancy a stroll? Or is it leg day at the gym (groan)? It doesn‚Äô
...Read More

Calf pain? All you need to know about Achilles Tendinosis  It‚Äôs Sunday, which can only mea
...Read More

Sprained your ACL? Let us guide you through Hello everyone and welcome to our July blog. We‚Äôre ha
...Read More

WEAK GLUTES? GET YOUR BUNS OF STEEL HERE! Nip into your nearest gym and you‚Äôll hopefully see a bu
...Read More

ATTENTION ALL NEW MUMS! May!!! We agree‚Ä¶. How is it May already? Well, May allows us to celebra
...Read More

The ageing process (AKA 30 years of age onwards), in the presence of high ROS (reactive oxygen spe
...Read More