Fancy a stroll? Or is it leg day at the gym (groan)? It doesn’t matter whether you are old or young, a cyclist, fishmonger or a green-fingered gardener. To perform the simplest of everyday tasks such as getting out of a chair, walking or climbing the stairs requires a complex array of movements using many muscles and joints. One particularly important group of muscles which helps us to perform such tasks is the quadriceps muscle group. Here’s a little run down of what they are and why they are important to you. Some anatomy and biomechanics for you…

The quadriceps or just ‘quads’ are a group of muscles found on the front of the thigh. As the name suggests, there are four muscles all together. As with most things on the human body, they have some fairly crazy names… We’re pleased to introduce you to Rectus Femoris (RF), Vastus Medialis (VM), Vastus Intermedius (VI) and Vastus Lateralis (VL). Start memorising now… We’ll test you on them later!

The VM, VI and VL muscles all span from the thigh bone (femur) to the leg bone (tibia) running down the front aspect of the body. The RF muscle sits on top of the three Vastus muscles and spans from the front of the pelvis to the leg bone where the other three muscles also attach. Because all four muscles cross the knee joint, they all help you to straighten your knee (known as knee extension). But because the RF muscle also crosses the hip joint, it has a separate function in helping you to bring your thigh forward in front of you (known as hip flexion). As the muscles run down the thigh and cross the knee joint, they converge into one big tendon which houses the kneecap or ‘patella’. And because the patella lives inside the quad tendon (it literally floats over the knee joint), the quads also have the very important function of controlling the movement and tracking of the patella over the knee joint. These powerful soldiers of the lower limb are partly responsible for ensuring that your kneecap doesn’t constantly dislocate (just imagine that!). So, they are a pretty useful group of muscles to have around. 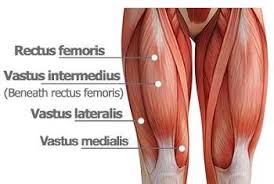 Let’s give you some examples in everyday life where you are using your quads. Climbing the stairs is a good example. As your leg goes forward towards the step, your RF muscle (along with some other muscles) flexes the hip. As you take your step up and your knee straightens to drive you up, all four muscles are acting together. Kicking a soccer ball is another good example. You run towards the ball, plant one foot next to the ball and the other leg swings through. RF drives the hip joint forward and all four muscles contract to straighten the knee so you can blast the ball into the top corner. This is quite a simplistic way of looking at things because as we’ve already suggested, there are other muscles helping all of this to happen, but you get the idea of how the muscles are working together to help us do these actions.

As with all muscles, there is potential for injury, and quad muscle or tendon injury is quite common. Muscles can be strained with varying severity, repetitive movements commonly lead to tendon related injuries, and taking a knee into the thigh from an opposing player for example can leave you with a nasty corked muscle, not to mention a dead leg!

…A TEST! Haha, we said there would be one! Look at the table below. On the left we’ve listed the two main movements that the quads are responsible for in the human body. It’s your job to list which muscles are responsible for those movements. Write down or tell yourself RF, VM, VI or VL for each movement. Try it first and then check back through the text to see if you’ve remembered. Who said tests aren’t fun?