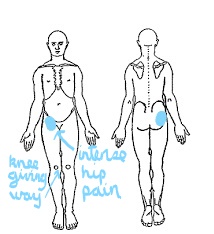 A 23 year old female cyclist presented with a 2 week worsening history of severe anterior and posterior hip pain when sitting, intermittent 'giving way' and 'loss of power' in the knee, especially worse going up stairs and going from sitting to standing.

She reported a minor fall onto her right side a few weeks previously whilst mountain biking. Otherwise, no previous history of any specific injury to that area, however a few major falls off bikes over the years, but nothing serious enough to require hospitalisation or on-going treatment.

Examination revealed a clinically stable knee. Step ups were described as weak but no 'giving way'. Knee extension strength was reduced. Sciatic nerve mobility testing was within normal limits. Hip flexion was uncomfortable but didn't reproduce the intense pain which she was describing. Ranges of motion testing of the hip, in flexion,were otherwise unremarkable. Gaenslen's testing in hip extension revealed some limitation of the Psoas Major and Rectus Femoris. 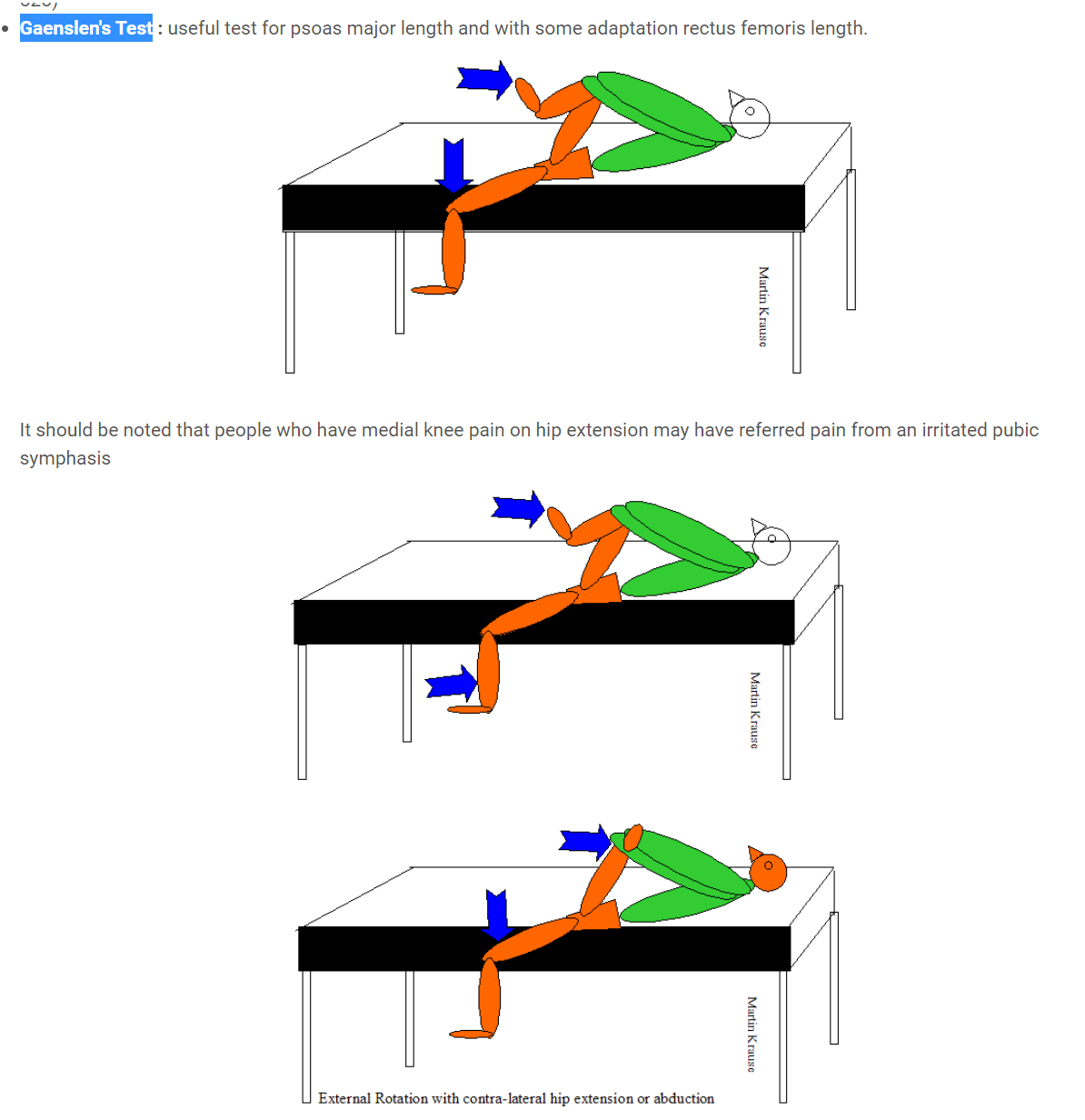 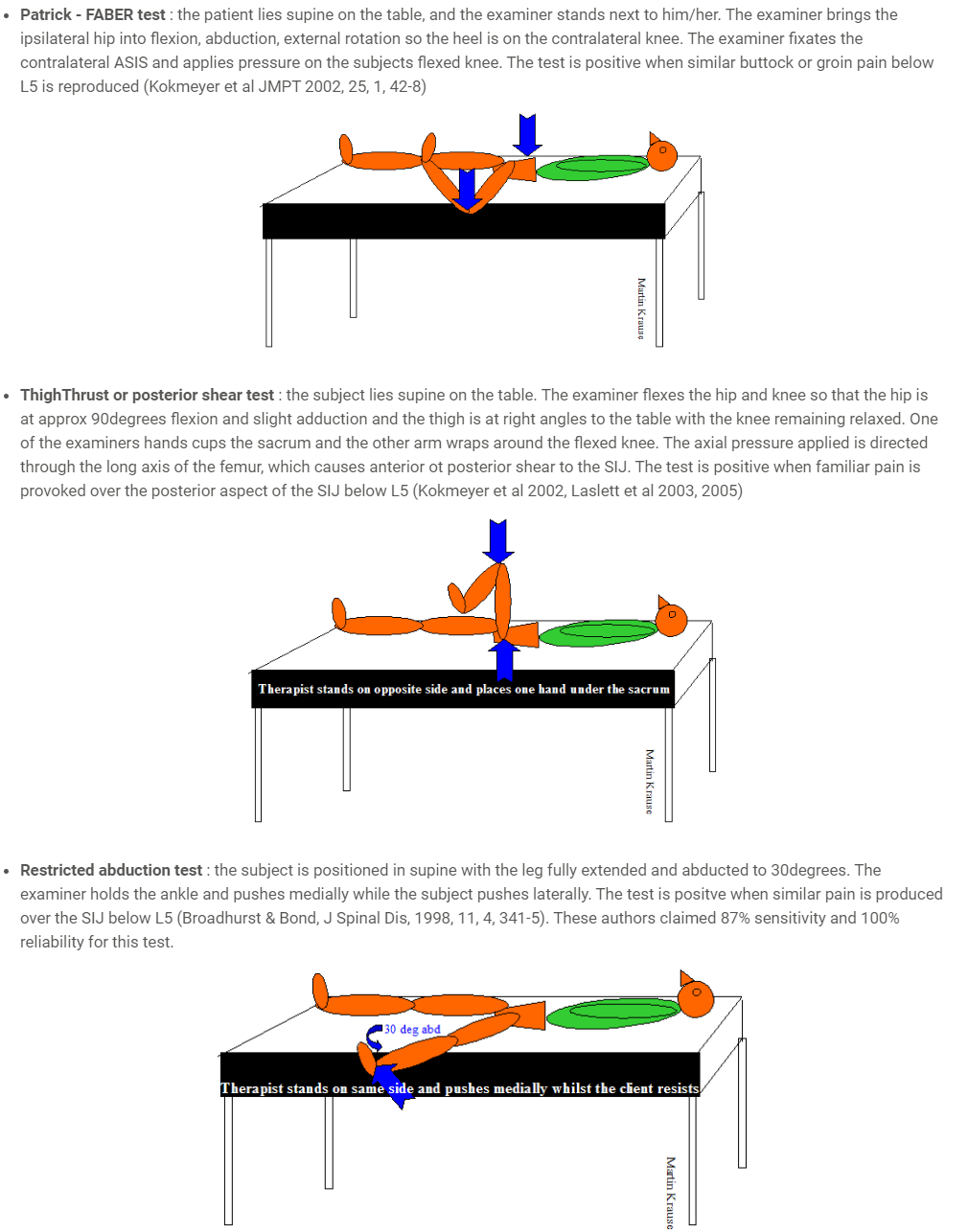 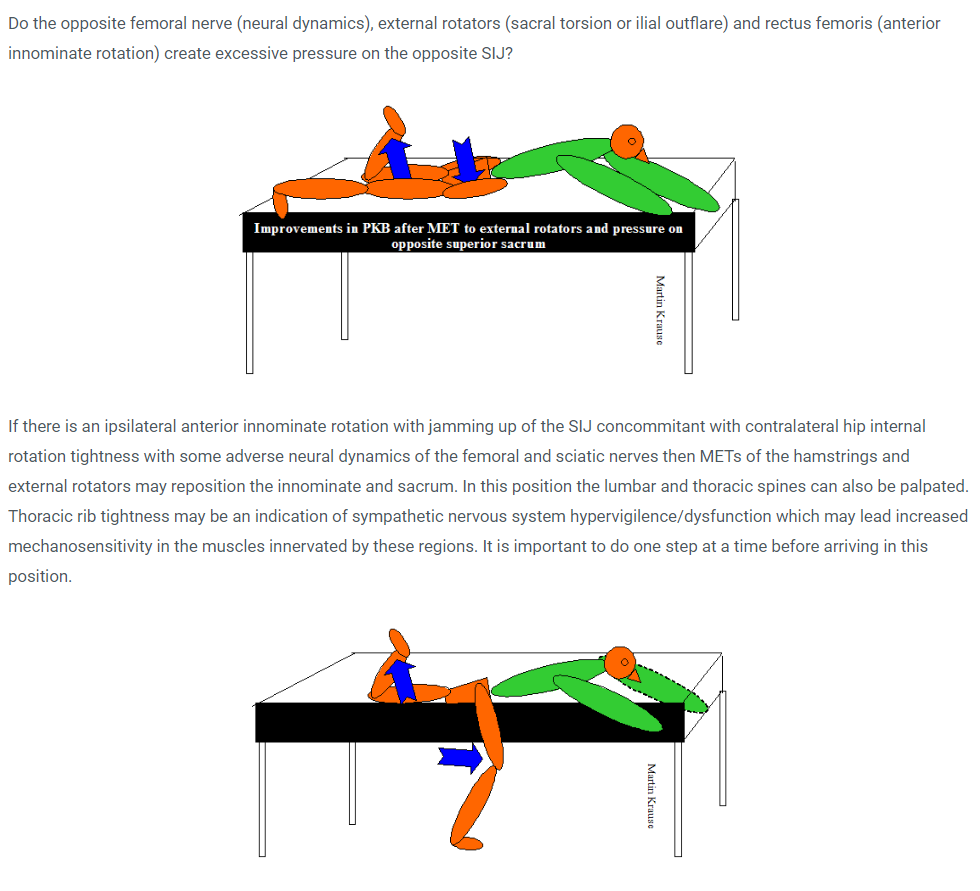 At this stage of the clinical reasoning process, things weren't getting any clearer. I noted previously that the foot seemed a little cold, I then asked her to return to supine, where i questioned her on any recent plane travel. An adventure racing friend of mine had a pulmonary emboli from a DVT in the abdominal region after spending time at altitude in Tibet and then flying home to Switzerland. I also quizzed her on any Leyden's Factor V or other clotting issues either diagnosed in herself or in someone in the family. I tested the femoral pulse superior to the inguinal ligament and it seemed quite strong. She was not taking anti-coagulants but was on the contraceptive pill. 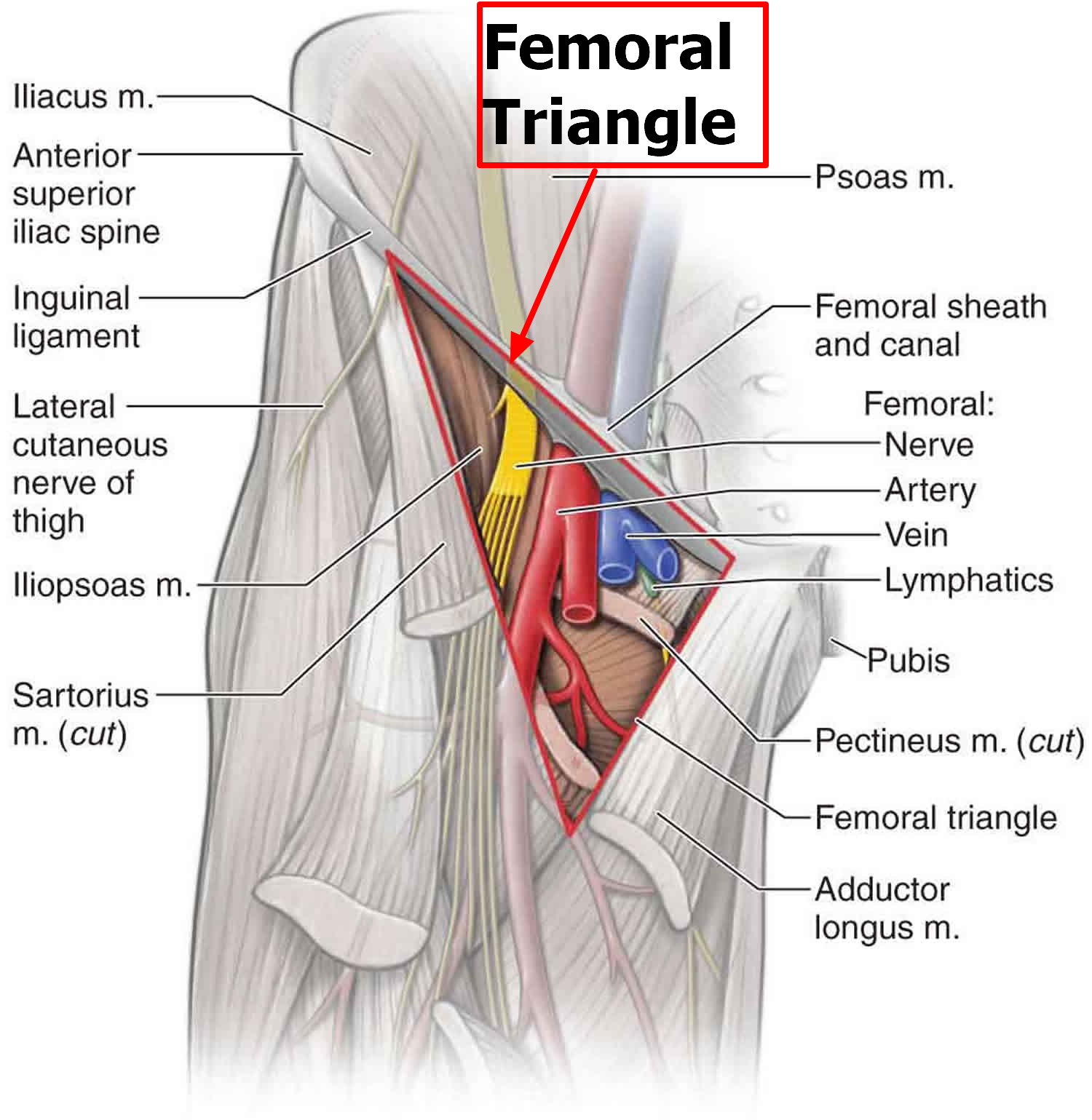 I decided to treat L1-L3 with joint mobilisations and the anterior hip with various techniques, including soft tissue massage, trigger points to the iliacus, quadriceps and adductors. Hip traction at 90 degrees flexion 'felt good'.The combined treatment improved the quads strength. However, I still didn't feel convinced that either the history or the physical examination and treatment had really explained the symptoms.

Five days later I received a phone call from her where she said she was falling frequently and that she could not sit due to extreme pain. I suggested to go to accident and emergency since the situation sounded desperate. Several tests were conducted, including a CT to the abdominal cavity and a doppler ultrasound which revealed a mass pressing on the femoral nerve and artery. Emergency surgery was peformed where a haematoma was discovered. This was evacuated resulting in an almost full immediate recovery. Some loss of quads strength was still evident 6 weeks later but was purely clinical.

Reviewing the literature revealed this to be a rare clinical presentation in the absence of taking anti-coagulant medication. When it did present, it was most common post surgically or in young adults and adolescents. 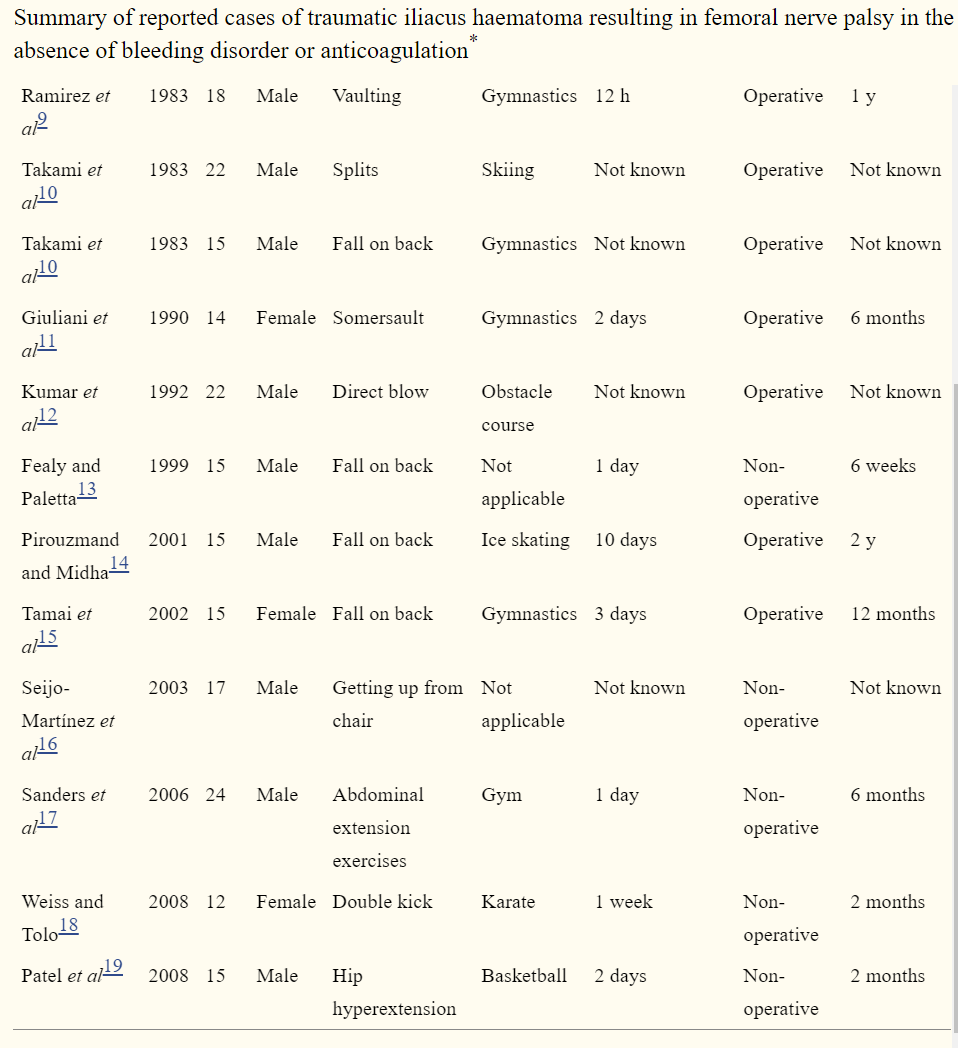 "Compression of the femoral nerve secondary to iliacus haematoma is widely reported in patients with blood coagulation disorders and those on anticoagulant treatment. Femoral nerve palsy caused by traumatic iliacus haematoma in the absence of bleeding diathesis has not been reported widely in the literature. All published reports occurred in young patients aged between 12 and 24 years and most cases were precipitated by a traumatic injury while participating in sport. Haematomas in this region present insidiously and are not heralded by an obvious lesion or ecchymosis. Patients initially complain of groin pain with the onset of neurological symptoms occurring as late as 10 days following the injury. The differential diagnosis for this syndrome is large and early recognition requires a high level of suspicion. A simple muscular strain is a common diagnosis in young athletes and can mimic iliacus haematoma in the early stages, and is regularly treated with non-steroidal anti-inflammatory drugs. These drugs have been implicated in the progression of the haematoma in a number of published cases.

The most common mechanism of injury in reported cases is a fall onto the back or buttocks, although more indolent precipitating injuries are described. Direct trauma to the pelvis or hyperextension of the hip may result in muscular tears leading to iliacus haematoma. Two separate syndromes of lumboscacral plexus compression are recognised. The entire plexus can be compressed within the psoas muscle resulting in weakness of those muscles supplied by the obturator and femoral nerves. Alternatively, the femoral nerve is compressed as it passes through the closed fibrous compartment formed by the iliac fascia and the ileum."