A 27 year old male presented July 2010 with neck pain, I/T left arm numbness, dizzy spells, pressure on left side of the head during the day whilst sitting at his work station. Had seen a physiotherapist 7 months previously without any improvement. Treatment had been directed at the thoracic spine rather than cervical spine. Previous history of a car accident (MVA) in 2001. Has been getting low neck and shoulder pain for the past 2 years. Keeps fit by going to the gym 5 times per week - mainly weights, as well as soccer 2 times per week (training + game)

Treatment directed at T1-4 and sustained contralateral rotation of C5/6, as well as an exercise regime of chin tucks, mid T/S extension, scapula stabilization and ergonomic advice given. Returned 2 weeks later getting worse. Pins and Needles both arms, but now in medial 2 fingers, dizziness still I/T with the pressure in the skull worsening. Treatment directed at mobility of the Upper C/S, Trapezius and Scalene and Pectoral muscles. Stabilizing exercises for the deep neck flexors (esp at C5/6) and scapula stabilizers. Returned 1 week later with some improvement, however noted that the dizziness worsened with Mulligan MWM maneuvers of the First Rib.

Examination revealed that depression of the 1st rib resulted in an immediate 'drop attack' with pupil vasodilation. A referral was made for Plain X-ray for a possible cervical rib and an MRA for vascular anomalies in particular the Vertebral Artery, and the Internal and External Carotid Arteries

A 54 year old lady presents with a 5 month history of insidious onset pain and numbness on the right face, vertigo and dizziness, numbness in the upper T/S and right webspace. Past history of motor vehicle accident 5 years ago. Also a fall at work in 2006 which fractured her S1 and coccyx. Chronic Low Back ever since.

Physical examination revealed generalized reduction in ROM to about 2/3. Palpation revealed stiffness on the left at C4/5, right C5/6 and C6/7. VBI negative. Caudal compression of the first rib resulted in immediate dizziness and light headedness. A family history of cervical ribs was noted, hence a referral for an X-ray confirmed the presence a cervical rib. Further referral to a vascular specialist was undertaken.

Compression of the cervical internal carotid artery by the stylopharyngeus muscle: an anatomical study with potential clinical significance. Laboratory investigation.

OBJECT: Occasionally, the internal carotid artery (ICA) may be symptomatically compressed in the neck by an elongated styloid process. The authors are unaware, however, of any study to date in which the aim was to describe the compression of this part of the ICA by surrounding muscles extending from the styloid process.

METHODS: In 20 adult cadavers (40 sides), dissection of the cervical ICA was performed, with special attention given to the relationship between this artery and the stylopharyngeus muscle. In addition, rotation of the head was performed while observing for any compression of the ICA by this muscle. Last, the segment of the ICA immediately adjacent to the stylopharyngeus was excised and evaluated for signs of gross compression.

RESULTS: Five sides (12.5%) were found to have an ICA that was grossly compressed by the neighboring stylopharyngeus muscle, and this was confirmed on excised ICA specimens. Moreover, such compression was increased with ipsilateral rotation of the head. Effacement of the lumen of the ICA by the stylopharyngeus ranged from approximately 30 to 50%. Such compression was increased by approximately 25% with ipsilateral rotation of the head.

CONCLUSIONS: To the authors' knowledge, compression of the cervical ICA by the stylopharyngeus muscle has not been previously described. Such a relationship should be appreciated by the clinician who treats patients with symptoms of ICA stenosis or occlusion as a potential extracranial site of compression. Based on this study, a subset of patients with occlusion of the cervical ICA but without elongation of the styloid process should be included within the definition of Eagle syndrome. 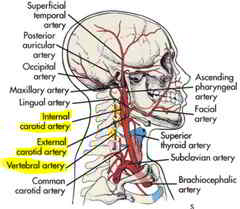 [Compression of the internal carotid artery due to elongated styloid process].

INTRODUCTION: Elongation of the styloid process has been reported as a source of pain in the head and neck region. However, transient ischemic attack (TIA) due to mechanical compression of the internal carotid artery (ICA) by an elongated styloid process has never been mentioned in the literature.

CASE REPORT: Male aged 36 years, with a ten-year history of dull intermittent pain in the left side of the neck that worsened on turning the head, suffered a TIA in the silvian territory, ten days after a minor neck trauma. The eco-Doppler exploration demonstrated a compression of the ICA after rotation of the head. The arteriography revealed an stenosis of the cervical ICA by an external compression. The length of the elongated process in the orthopantomogram and the computed tomography was 35 mm. Angiotomography showed a closed relationship between the tip of the left elongated process and the stenosis of the ICA. Surgical styloidectomy was performed via an extraoral approach under general anaesthesia. The excised specimen measured 30 mm long. All symptoms were relieved with no recurrence during a three-year follow up period.

CONCLUSION: TIA should be taken into account in the clinical feature associated to an elongated styloid process. Angiotomography is very reliable to define the anatomic relationship between the styloid process and the ICA. The treatment of choice is surgical shortening trough an external approach which provides an adequate control of the carotid artery. 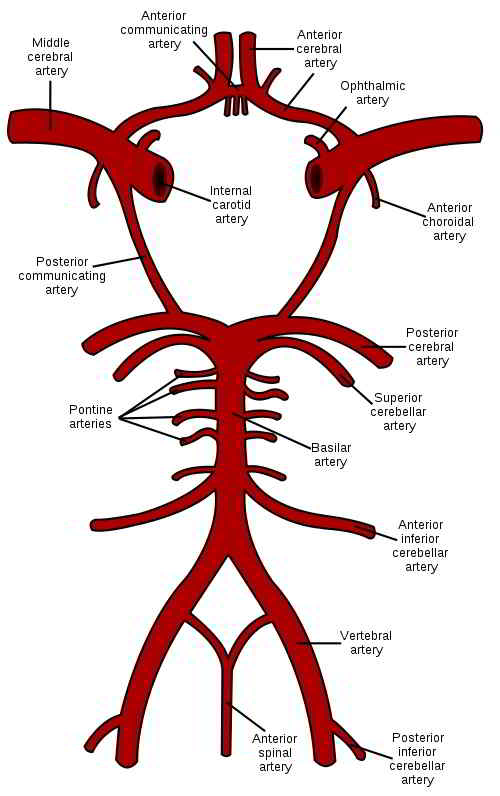 In this brief article we describe the role of compression of the vertebral subclavian arteries, internal mammary, internal carotid arteries, brachial plexus and coiling and kinking of the vertebral and basilar arteries, the faulty irrigation of blood supply and oxygen of the cerebellum and basal ganglia of the brain. Among the effects are: a decrease in the secretion of dopamine at the level of the putamen, which produces the symptoms of Parkinson's disease, and chorea due to chronic transitory faulty blood supply and oxygen to the caudate nucleus, ballism by hypoxia at the level of subthalamic nuclei and athetosis in the lenticular nucleus. This compression is caused by the anterior scalene muscles and the cervical ribs at the level of the vertebrae C6-C7; by the sternocleidomastoid at the level of the cervical atlas; and coiling and kinking of the vertebral, basilar and the internal carotid arteries. The decreased blood supply to the cerebellum and basal ganglia is the cause of the Cerebellar Thoracic Outlet Syndrome (CTOS) and its neurological complications, among which are ipsilateral paralysis, Parkinson disease and others. We are presently engaged in several studies to widen our understanding of this phenomenon.

Exercise and the Immune System during COVID-19 During this time of crisis, we've been told to exerc
...Read More