Several reasons exists for the development of a cycle path along the railway line between Mt Victoria and Katoomba.  These reasons include

An integral part of the NSW Dep't of Planning for trails :

The majority (20 of 30km) of the trail already exists (see pictures below).  What is required is legal access to the area, upgrading of the trail, and public awareness of its existence. 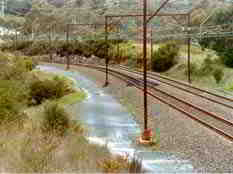 Unfortunately, whilst Victoria, Queensland, Tasmania and Western Australia are spending $10's of millions on Rail Trails and Greenway projects, NSW is spending next to none. 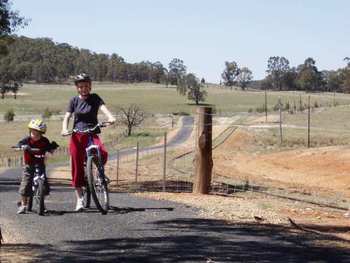 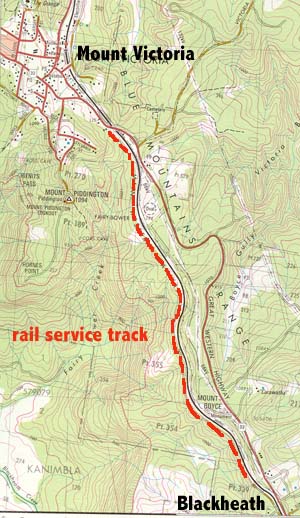 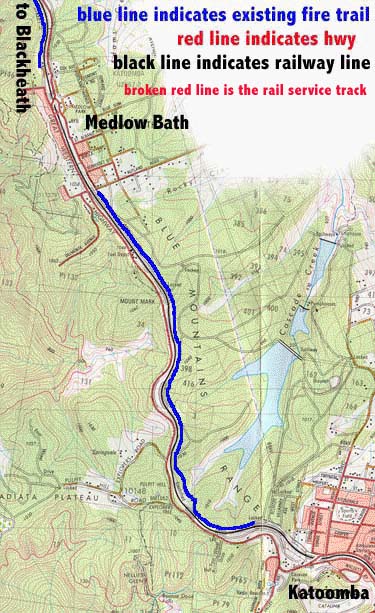 "If everyone who lives within 5 miles of their workplace were to cycle to work just one day a week and left the car at home, nearly 5 million tons of global warming pollution would be saved every year, the equivalent of taking about a million cars off the road. "

This email address is being protected from spambots. You need JavaScript enabled to view it.

It is naturally difficult to make inroads into a political process which is fragmented in it's decision making process.  Unlike Victoria, NSW doesn't seem to have an authority specifically charged with the development of cycling facilities along railway lines (greenway projects) or Rail Trails along abandoned railway corridors.  It is highly intriguing for a location which prides itself on it's tourist attractions, not to create facilities which cater for a wider spectrum of people.  The Murray to the Mountains Rail Trail in Victoria is estimated to generate $2.3 million in tourist revenue in just 4 days over Easter. Victorian tourism actively promotes several Rail Trails in their interstate marketing strategies.  Such strategies have even included a colour lift-out in the Sydney Morning Herald.  In contrast, during this same period of time Blue Mountains Tourism appears to be extremely concerned regarding depleting tourist numbers.  Bush fires and September 11 and various other intangibles have been blamed.  Yet, apart from steep bush walks, little other outdoor 'family' activities are catered for in the Blue Mountains. In the same year (2004-5) an independent survey estimated that $213 million was spent by cycle tourism. I am not suggesting that a Rail Trail - Greenway project will save Blue Mountains tourism, however similar models in the USA, Canada and even the UK have shown major economic, environmental, health and social benefits where they have been constructed.  Presently, the upgrades on the Great Western Highway are seen as a substitute for the Rail Trail! However, would you ask your children to go and play on the highway? Highway cycling is only appealing to a select few, whereas Rail Trails appeal to young and old, cyclists and non-cyclists and is a great family bonding activity.

Links to Newspaper articles for further details of this project.

Other external links relating to Rail Trail advocacy are listed below

Ken Pickering's letter to the Blue Mountains Gazette deserves support for the prevention of the appalling acts of vandalism, which are occurring in the culturally significant abandoned Lapstone railway tunnel reserve. A simple solution would be for the BMCC to develop a Rail Trail - bike/walking track. Generally users of rail trails are law abiding citizens who become the eyes and ears of the community. "Crime and fear of crime do not flourish in an environment of high energy and healthy interaction among law abiding community members. Thus, the quality of life is enhanced in several ways including the enhancement of individual physical fitness, a safer mode of transportation for cyclists and pedestrians and the potential for less crime overall in the communities." Furthermore, due to their unique gradient, Rail Trails are appealing for young and old, fit and not so fit. Rail Trails are encouraging people (50-60% locals) of all ages to exercise more due to the easy grade and safety of the pathway see:  http://www.routeverte.com/ang/index.lasso .Victoria and other states have a very large and expanding network of trails along abandoned rail corridors. http://www.railtrail.com.au . 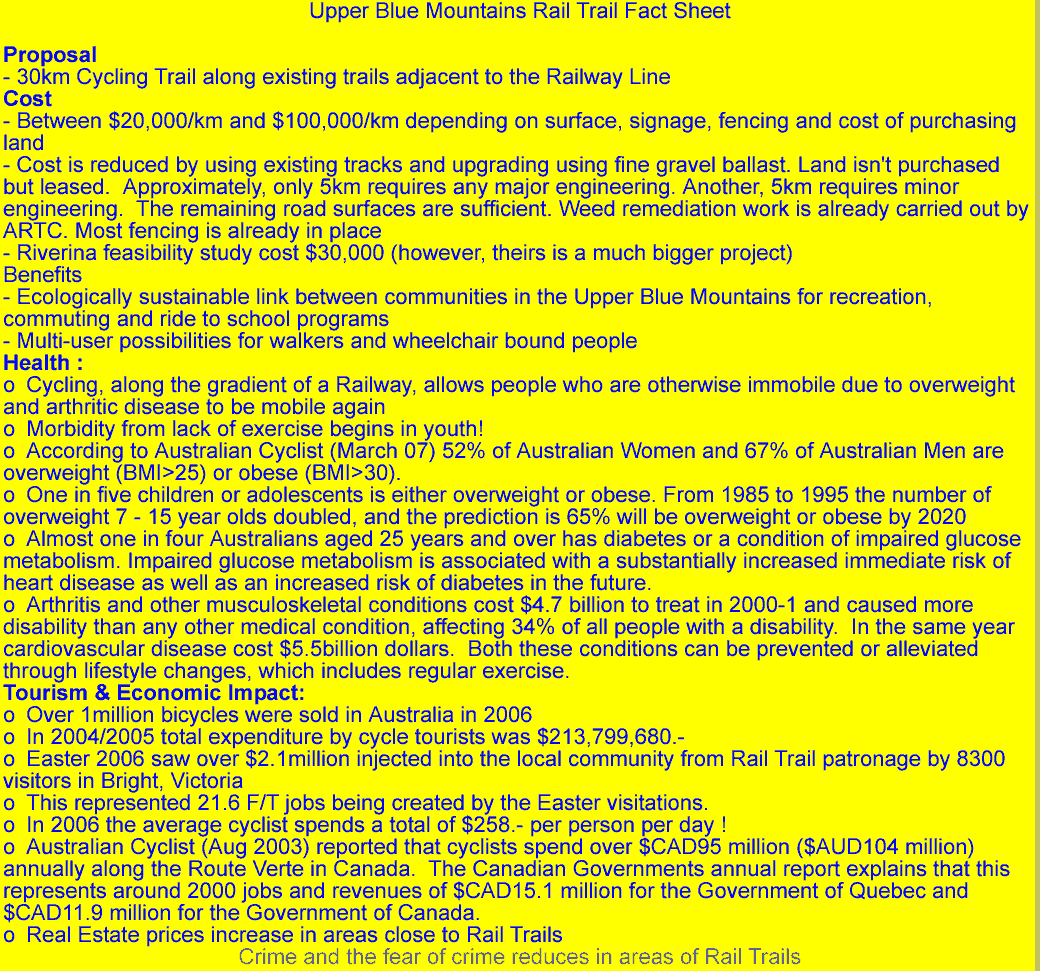 It should be noted that I have no financial interest in any way with the future construction of this proposed Rail Trail. I am simply a family man who has a vested interest in healthy pursuits for my friends and family. I also feel a sense of duty to the close to 1000 people who signed my petition in 2000 - 2001. Finally, these pages receive around 2000 hits per month!

The Federal Labor Government today announced it would contribute $500,000 towards the construction of a new walking and cycling track in the Blue Mountains.

This funding is for the second section of the Great Blue Mountains Trail which will add 13.2 kilometres of new walking and cycling track linking the towns of Katoomba, Medlow Bath & Blackheath.

Minister for Regional Development and Local Government, Anthony Albanese said the trail would add to region’s appeal as a walking and cycling destination.“Tourism is the primary economic driver in the Blue Mountains region and the trail will provide a new and interesting visitor experience and bring a positive economic impact,” he said.“The new trail will generate tourism spending by New South Wales, interstate and overseas visitors and support local businesses associated directly with trail activities such as tours, cycle sales and hire, as well as for cafes and hotels.” Senator for New South Wales Doug Cameron said the newly funded section will be moderately graded and offer the local community and visitors a safe connection through scenic areas. “The trail will eventually go for 36 kilometres from Leura to Mt York, and to the lower mountains and Lithgow. Its moderate gradient will make it accessible and available to walkers and cyclists of all ages, including families,” he said. “This project is a good example of the real benefits of targeted, long term investment in regional communities.“The construction of this project, and the resulting increase in tourist numbers, are expected to create an additional 250 jobs in the region.”Funding is being provided to the Blue Mountains City Council under Round Four of the Australian Government’s Regional Development Australia Fund.Stage 2 of project will be completed in the second half of next year with the total 36 kilometre regional trail to be completed by June 2019.Tuesday, 11 June 2013Media contacts:Minister Albanese: Virginia Kim 0407 415 484Senator Cameron: Mark Andrews 0417 024 890

Link to Newspaper articles, Economic Impact and Political Process regarding this proposal

Word Document regarding this proposal (February 07)

PDF Document regarding this proposal (February 2007)